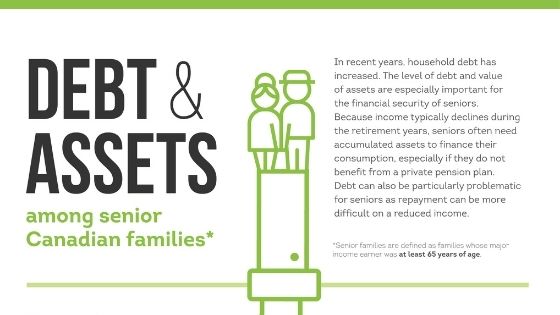 The median net worth of senior families with debt—which corresponds to the total value of assets minus the total amount of debt—increased from $298,900 in 1999 to $537,400 in 2016 in constant dollars.

Senior families are defined as families whose major income earner was at least 65 years of age.

A strong housing market in recent years was responsible for both higher mortgage debt among senior families and for an increase in the value of their homes.

These results are from the new study “Debt and assets among senior Canadian families” released today in Insights on Canadian Society. The study examines changes in debt, assets and net worth among Canadian families whose major income earner was 65 years of age or older.

In recent years, household debt has increased. The level of debt and value of assets are especially important for the financial security of seniors. Because income typically declines during the retirement years, seniors often need accumulated assets to finance their consumption, especially if they do not benefit from a private pension plan. Debt can also be particularly problematic for seniors as repayment can be more difficult on a reduced income.

The significant increases in debt and assets of seniors were largely attributable to the strong housing market in recent years. From January 2005 to December 2016, housing prices rose by 109.8% in nominal terms. These changes affected the financial balance sheet of many Canadian families.

Among senior families with debt, about two-thirds of the overall increase in average debt levels was attributable to mortgage debt, while the remainder was due to an increase in consumer debt (that is, debt other than mortgage debt such as outstanding balances on credit cards, lines of credit, loans from banks, vehicle loans and unpaid bills).

Meanwhile, real estate assets represented 52% of the overall increase in the average value of total assets over the period. The value of employer pension plans contributed an additional 12%, while the remainder (36%) was due to increases in other types of assets (such as financial investments, for example, RRSPs and other non-housing asset items).

These results differed across categories of senior families. For instance, senior immigrant families were more likely to have greater debt than income (44%) relative to the Canadian-born (33%). In contrast, senior families in Atlantic Canada were less likely to have debt levels greater than their level of income, reflecting relatively low debt levels among seniors in Atlantic Canada.

Having more consumer debt than income can place families in an especially vulnerable financial position. In 2016, 14% of senior families had consumer debt that was higher than their after-tax family income, up from 4% in 1999. For these families, meeting financial obligations could be a challenge as a large portion of their income would go towards servicing the debt that is not backed by an asset.

Additional insight into the financial situation of senior families can be obtained by examining the debt-to-asset ratio. Families with a higher debt-to-asset ratio have higher leverage and are considered to be in a weaker financial position because the value of their assets is not enough to service their debt.

A debt-to-asset ratio greater than 1.0 means that a family has more debt than assets–a rare occurrence among Canadian senior families. Conversely, families with a debt-to-asset ratio closer to zero have very little debt relative to their asset levels.

Given that housing-related assets and debt both increased during the period, the debt-to-asset ratio remained relatively stable among senior families. The median debt-to-asset ratio was 0.06 for Canadian senior families in 2016, meaning that the value of debt of the typical family amounted to 6% of the value of its assets. This rate remained largely unchanged from 0.05 in 1999.